"This alert was based on a NEAR MISS INCIDENT wherein a piece of concrete fell from a height of about approximately 50 ft (15m) and hit a worker below. The worker was wearing a hard hat at that time, otherwise it could have resulted to serious injury or even death. The size of the piece of concrete which fell was around the same size of a plumb stone and actually embedded itself on the side of the hard hat". 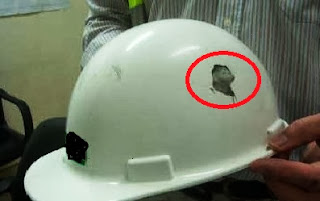 This incident illustrates the importance of wearing a hard hat and how serious the impact of not carrying out proper housekeeping can be.

IMPORTANT NOTES FOR HARD HATS:
The average of a SAFETY HARD HAT weighs about 14 oz. The average man's head weighs 14 lbs. So there's an ounce of safety for every pound of head - provided the head protection is properly worn and maintained.

Hard hats not only reduce the chances of serious injury resulting from falling objects, but it protects you also when you bump your head on things like machineries, ductworks, ceiling tie wires and forms. Non-conductive hard hats protect you from electrical shock and burns. Make sure that your hard hat is the right one to your job and MUST WEAR IT!

THERE WILL BE NO HELP UNLESS YOU WEAR IT. The hard hat is a very useful piece of safety equipment.

Don't take chances - wear your hard hat at all times, it protects your head and brain as well. Keep your hard hat always clean, in good condition and replace it immediately if it is damaged.

In case a head injury occurred, report immediately to your supervisor.


Complaints Vs. Facts about Hard Hats: